On the evening of May 26, MainPAC presented Dr. Jonathan Metzl in a special reception and then a general presentation. The evening, despite a few hiccups, was a tremendous success, thanks to Dr. Metzl, the MainPAC Committee, and all of our patrons and supporters. 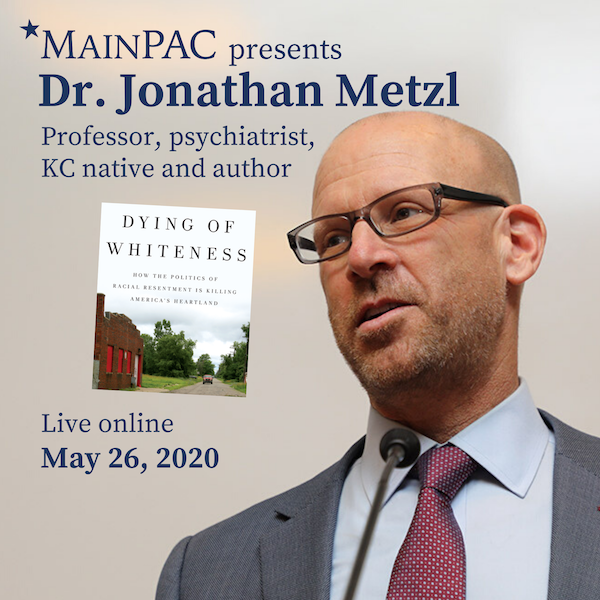 Dr. Jonathan Metzl is a professor, psychiatrist, KC native and noted author of Dying of Whiteness: How the politics of racial resentment is killing America's Heartland. Based on research undertaken in Kansas, Missouri and Tennessee, Dr. Metzl shows how many lower and middle class white Americans are drawn to politicians who pledge to make their lives great again. But as Dying of Whiteness shows, the policies that result actually place white Americans at ever-greater risk of sickness and death.

Dr. Metzl is a Professor and the Director of the Center for Medicine, Health, and Society at Vanderbilt University, a Psychiatrist, and the Research Director of The Safe Tennessee Project, a non-partisan, volunteer-based organization that is concerned with gun-related injuries and fatalities in America and in Tennessee.

Listen to Dr. Metzl talk with The Washington Post about how the coronavirus is exacerbating the issues he talks about in his book.

Watch Dr. Metzl talk about the last time white men have had a three-year drop in life expectancy, 100 years ago during the flu pandemic of 1918.

In addition, he has contributed extensively to highly respected professional publications. Dr. Metzl talks, writes and teaches about topics including Mental Illness and Gun Violence, with a particular focus on Gender and Race.

Dying of Whiteness: How the Politics of Racial Resentment Is Killing America's Heartland is a 2019 non-fiction book written by Dr. Metzl, based on research undertaken in Missouri, Tennessee and Kansas from 2013 to 2018.

MainPAC, the political action committee of the Mainstream Coalition, supports and advocates for candidates for office who align with Mainstream’s mission of good governance, quality public education, healthy communities and sustainable fiscal policy, regardless of political affiliation.

MainPAC’s support in the 2018 elections helped to elect U.S. Representative Sharice Davids, Governor Laura Kelly, a majority mainstream Kansas House of Representatives, and a rising number in the Kansas Senate.

Thank you to our Sponsors